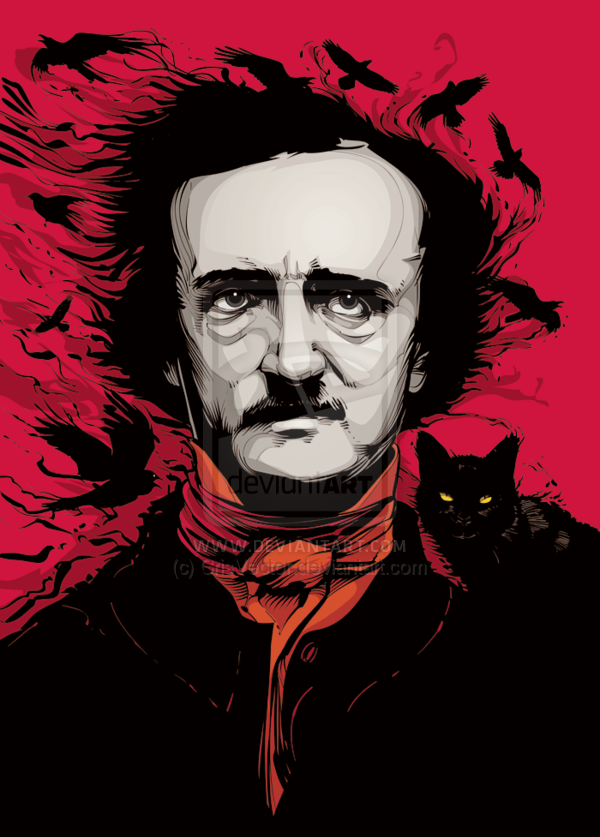 Every year, I teach Edgar Allan Poe, and, although my students are reluctant to read his works at first,  they end up loving him. The one fact that they never forget is that he married his 13 year old cousin (even though she was his cousin through marriage). Out of all the facts that they learn about Poe, this is what they are amazed with! kids! Then they start to say he is a creep and a cradle robber….

Recently, we just finished reading “The Raven” and “Annabel Lee” -(some loved the poems , while others hated them!) I can’t make everyone happy!

A few of my students arrived to class today telling me that they saw the movie “The Raven” which just came out starring John Cusack. Just so you readers know, the movie does not follow the poem “The Raven,” however, the title of the movie fits because a raven was considered to be a messenger of death. Isn’t that charming? My students said they felt misled by the title, but they loved it!

Of course,  being a huge Poe fan, I just had to see it! My husband even mustered up enough energy to tag along!  Surprisingly, I LOVED it. My husband could not believe that I actually sat through the entire film! ( I get bored VERY easily) I LOVED how they incorporated different aspects of his short stories throughout the movie. I am not going to give too much detail because I don’t want to ruin it, but it is a must see!

Also, Cusack portrayed an accurate depiction of Poe (in my eyes–based on what I have read about Poe’s life). The movie  allowed me to  view Poe in a different light. After you read about his biography, you think he is a bit disturbed and crazy. I mean, who wouldn’t? It’s Poe! After viewing “The Raven” I sorta had a new found respect for Poe. I empathized with him on a whole new level and saw a romantic side of him that I was unable to see before.

Throughout my years in college, Poe, was my all time favorite American Poet. I love how he is best known for his dark and dreary works that are filled with gothic elements. My  favorite poems by Poe are “Annabel Lee” and “The Raven” which both focus on the theme death of a beautiful woman. Because his poetry is so beautiful, I always catch  myself reciting lines from them repeatedly in my mind, such as his famous lines from “The Raven”.. “quote the raven nevermore” and “once upon a midnight dreary while I pondered weak and weary.” The lines from”Annabel Lee” that I cannot forget are: ” For the moon never beams without bringing me dreams; And the stars never rise but I feel the bright eyes.”

There is something absolutely intriguing about Poe’s works that make him an extraordinary writer. In my mind, although he was deranged and fully embodied the characteristics of a madman, he was absolutely brilliant. In many ways, I feel as though I can truly relate to  Poe’s life. I believe, many of us can, one way or another.

I can relate to him on many different levels— minus the ability to write gruesome horror stories… Like Poe, I lost my mother and my father had left when I was young.  I was adopted and so was Poe. He struggled with mental illness and despite the fact that my husband has called me crazy several times, I have been diagnosed with ADD, Bipolar and Generalized Anxiety Disorder. Hey, what do ya know? It is always the crazy ones who are creative.

Like Poe, writing has always been my outlet of expression.  He had such a gift and it was a shame that he was not recognized sooner. I truly admire Poe, because despite all of the obstacles he had faced in life, he became a success and his legacy lives on.